Born Joseph Henry Burnett III (January 14, 1948 ) is a producer, songwriter, and musician. Burnette was born in St. Louis , Missouri but grew up 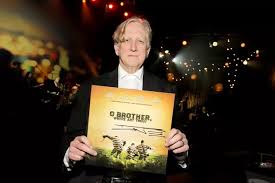 in Fort Worth, Texas, where his father had found work with the Tandy Corporation (Radio Shack .)  In his teenage years, he teamed with his high school friend Stephen Bruton , and
together they formed several garage bands , influenced by a diverse group of artists, including the Beatles, jazz and blues artists, as well as Cole Porter, Peggy Lee , Johnny Cash, and Jimmy Reed. Burnett played guitar and drums, but about the time of his high school graduation began to frequent Sound City , a recording studio in the basement of a local radio station. Burnett evolved from a player to producer and A&R ( artist and repertoire ) agent, although in the early ’70s, he played guitar in Bob Dylan’s band. This is how
he came to the attention of those who would shape the course of his career. In the ’80s and ’90s Burnett collaborated with the likes of Elvis Costello, Elton John, Greg Allman, Counting Crows, Los Lobos, and countless others. In 2007, he united blue grass great Allison Krauss with blues/rocker ( Led Zepplin lead singer )
Robert Plant to produce the album Raising Sand , netting Burnett one of his several Grammy awards.
Link to Burnett’s discography: https://en.wikipedia.org/wiki/T_Bone_Burnett_production_discography
Burnett has spent most of the past two decades composing and /or producing movie soundtracks, notably Oh Brother Where Art Thou, Roy Orbison and Friends: A Black and White Night , The Big Lebowski and the Hunger Games. T Bone Burnett has won numerous Grammy awards, most for composition and
production. Usually, in the background of spectacular projects, Burnett has been
and remains a major force in popular music , C&W , movies, and theatre. He is truly a “Star’s Star”.

Very few individuals have done as much to promote music, musicians, and recording in the Dallas area as Ed Burnet.

Burnet is a native of Highland Park ( a suburb of Dallas ) , and a graduate of Highland Park High School and SMU.  He played football at SMU, then a short stint with the Pittsburgh Steelers ( 1955 ), followed by the AFL's Dallas Texans  ( now the Kansas City Chiefs )   in 1960.  Ending his football career in early 1960, Ed turned to music and formed the "Dixieland Seven'.  In 1961 he contacted the owner of the Dallas Sovereign Club ( Jack Ruby ) for a place to perform, but could never reach a mutually acceptable agreement.

Later in 1961, he purchased and renovated a small club on Mockingbird Lane and named it the Levee Club.   In March 1961, the Levee opened with the Dixieland Seven as the weekend headliner.  During weeknights, the Levee Banjo Band played, later named the Levee Singers.   Two of the members were already well-known players, including Ronnie Dawson and Marvin "Smokey" Montgomery, both prior members of the "Light Crust Dough Boys."

Working with a Los Angeles-based agent, the Levee Singers appeared on multiple TV shows, including the Jimmy Dean Show, the Danny Kaye Show, and Hollywood Palace.   The Levee Singers also made appearances in Las Vegas.

The Levee Club was sold and then closed in 1970.

Throughout the 1960s, Burnet also entered the recording industry, opening Sumet Sound ( later Sumet Burnet ) Studio with engineer Bob Sullivan.  Sumet was a popular studio with local and national musicians.  Kenny and the Kasuals recorded "Journey to Tyme " at Sumet Sound Studio in 1966.

Jimmy Vaughn, the Fabulous Thunderbirds, and the Rolling Stones also used the studio when in Dallas.  The studio was a working enterprise and productive into the late 1980s.

The Levee Singers celebrated their 50th Anniversary at The Pocket Sandwich Theater in Dallas ( actually down the street from the old Levee Club location in 2011.